The last two contested mayoral elections in Denver have produced modest voter turnout compared to partisan elections, which regularly see more than 200,000 voters participating. The 2018 midterm election counted 312,000 ballots cast in Denver and 194,000 in the 2010 general election. Whereas Denver municipal elections in 2003 and 2011 turned out 113,000 in both general elections (1st race) and only slightly more in the 2011 runoff. 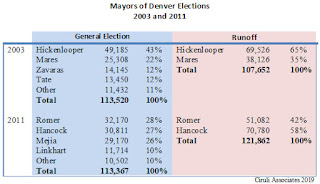