John Hickenlooper just moved from an asterisk to one percent in the latest CNN poll. Out of the ten declared candidates (or highly rumored) listed, Hickenlooper was tied with three others in the bottom 40 percent (Julian Castro, Kirsten Gillibrand, Jay Inslee). But, Hickenlooper was finally registering a few mentions among the 436 Democrats or Democratic-leaning independents CNN interviewed. And, one percent is good news since it’s the threshold in three reputable national polls needed to gain entrance to the first debate. 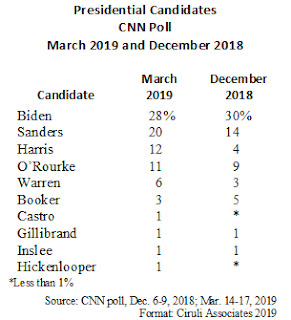 As discussed on KOA this morning, Hickenlooper makes his CNN debut with an hour town hall tonight. Can he translate that appearance into 5 percent by June to make it into the top tier of candidates? (John Kerry, who got 4 percent, was not listed due to no evidence, yet he’s mounting a campaign.)
Posted by Floyd Ciruli at 12:36:00 PM