In 1992, Democrats managed to turn out more than 234,000 in a contested primary California Governor Jerry Brown won. But with Bill Clinton, the unopposed incumbent in 1996, there was no contest, and only 84,000 Democrats voted in 2000 as Vice President Al Gore was seen as the likely nominee. Republicans’ biggest primary turnout was in 1996 when Senator Bob Dole received 44 percent of more than 246,000 voters. But, first President Bush as an incumbent won 68 percent, with 190,000 voters participating in 1992, and his son, George W. Bush, won 65 percent in 2000 as he was seen as the very strong frontrunner and only 177,000 Republicans turned out.

Hence, with the economic downturn of the early 2000s, Governor Bill Owens suggested going back to the party administrated caucus and dropping the primary.

The newly authorized Colorado primary likely to be held on the first Super Tuesday, March 1, 2020, will have little or no Republican participation, but a record turnout can be expected among Democrats and newly enfranchised unaffiliated voters. 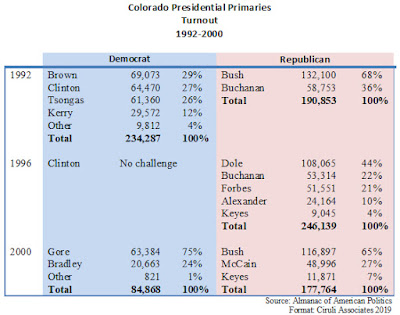