After an initially slow ballot return with only 101,000 counted late Monday, by early Wednesday morning, another 80,000 ballots showed up on Tuesday. It led to a slow count after the first 95,000 reported at 7:00 pm Election Night. 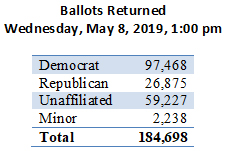 The massive turnout is more than 70,000 above the last competitive mayor’s election in 2011 when Michael Hancock first won an election spot on the run-off ballot. It reflects that 68,000 more voters have been added to Denver’s polls since 2015 in the last city election.