Hancock Forced into Run-off with Giellis

As expected, Mayor Michael Hancock was unable to reach 50 percent plus vote to win re-election outright. Jamie Giellis, the second biggest fundraiser, came in second with about a quarter of the vote (27%). 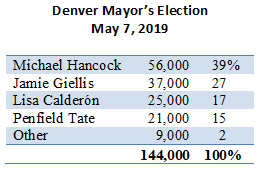 Hancock will start with an advantage if he can replenish his campaign treasury, but Giellis has the 60 percent of the electorate that is unhappy.

See The Buzz: Denver Municipal Election. Some Things to Watch for Election Night.
Posted by Floyd Ciruli at 1:16:00 PM