Tragedy often changes a president’s policies and politics. President Bush became a war president after 9/11 and never entirely recovered from the onslaught of Hurricane Katrina and its blow to New Orleans. President Trump is currently dealing with Hurricane Harvey and the Texas coast, but the August 12 violence in Charlottesville, Virginia, and his subsequent press conference are still affecting his public image, his relationship with fellow Republicans and the corporate leadership he had recruited to serve on various White House councils.

In a 9KUSA interview on Wednesday, August 16, with Kim Christensen at the 4:00 pm news, what a teacher would tell high school or college students was discussed. Some points made were: 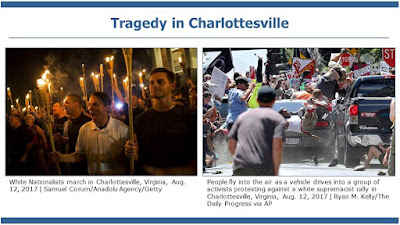 Polls subsequent to the Charlottesville event and Trump’s handling of it.

In a PBS NewsHour, NPR/Marist poll of August 14-15, 2017, 52 percent of respondents think Trump didn’t issue a “strong enough” statement on the violence in Charlottesville. An early Washington Post-ABC News poll (Aug. 16-20, 2017) agreed and showed disapproval of President Trump by two-to-one (56% to 28%). But in the earlier NPR poll, 62 percent believed statues of confederate leaders should “remain as historical symbols” vs. “removed as offensive” (27%). Also, many Republicans tend to believe there is “a lot of discrimination against” white people (42%) and Christians (48%).

This became a moment when Americans and citizens around the world would expect the U.S. president to act as the sovereign, the symbolic head of state, and condemn evil and call for unity and healing.

Trump tried, but mostly his reaction was as the head of Trump Nation, something between offering color commentary of the events and a defender of what he believed were “good people”; i.e., protectors of confederate statues. It was a poor choice of roles and disastrous timing. He paid dearly. In a Pew Research poll at the end after event of August 15, Donald Trump was judged harshly for his conduct as president, even by Republicans who have been faithfully approving of his presidency, especially on issues. More than half of the public (58%) don’t like his conduct and almost two-thirds of Republicans (65%) now have either mixed feelings or don’t like his conduct.