Impeachment: How It Will Work

Donald Trump likes to live on the edge. He still has his base, but the broad reach of the country’s leadership community, from small towns to the big cities, are beginning to believe that, regardless of their preferences for many of his policies, Trump is not suited to the job. His failure to move the big agenda, combined with the constant controversies, mostly self-created, highlight his greatest weakness – the character issue.

As opposed to a parliamentary system where if a leader loses his or her majority, he must stand down. America’s elections are regularly scheduled. But if Republicans lose their House majority, impeachment is possible. Most likely, the Democratic Party would prefer to just end his term at four years in 2020, but his actions or political pressure may start the process.

A bill of impeachment, an indictment, would start in the House and most likely use whatever investigative materials had been gathered up to that point. The Judiciary Committee is the usual committee of jurisdiction (today, the ranking Democrat is Rep. John Conyers of Michigan) and would likely conduct any final investigations and hold public hearings.

A majority vote of those present and voting can get the impeachment bill out of the committee and then through the House. The Senate, of course, is Trump’s firewall. It is unlikely Democrats will take control in 2018, and even if they did, it requires a two-thirds majority, or 67 votes, to convict. As of today, it seems unlikely a Barry Goldwater scene will ensue as in 1974 when he led a Republican delegation to the White House to tell President Nixon he didn’t believe there were 15 Republican votes to stop a conviction in the Senate. It was assumed the House would vote to indict. Goldwater also made the case that the country should not have to go through the ordeal of trial and conviction.

If this scenario played out today, the House action would start in 2019, just as both parties start the prep for the 2020 general election, a trial could follow in the Senate. Would Republicans move to dump Trump? Could they succeed or does his base hold? Will he have 34 Senate votes in two years?

This seems like a far-fetched scenario today, but it makes for interesting speculations. 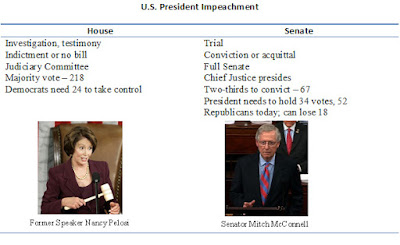