Kelly Needs to be a Theater Director

The White House has been the stage set that Donald Trump has used to star in the first seven months of the show – “Trump.” The personalities and production has led to some riveting moments, but a poor performing government. As the President’s poll numbers collapse, he finally recognizes his problem and brought in a director. He made John Kelly, Secretary of Department of Homeland Security, the new Chief of Staff.

In the blog, “Staging the First 100 Days from the White House” (May 5, 2017), I described the unique decision structure Trump created, which will make Kelly’s job difficult:

Flat decision process. There is no chain of command. Trump is the star, he decides. Chief of Staff Preibus has some staff, but clearly he doesn’t control access or the agenda.

Centers of conflict. There are numerous power centers defending turf and viewpoints. Competition between nationalist Steve Bannon vs. globalist Jared Kushner is the highest profile conflict, but Preibus has his turf, Kellyanne Conway has hers.

Stay close to the desk. Trump is a mercurial man who tends toward the provocative and the impulsive. If you want to defend a position, an initiative or a space, stay close to his desk. The last person who talks to him often has the most influence.

Incessant tweeting. Add to that May 5th list the incessant tweeting of policies, personnel changes, insults, exhortation and random ruminations and it makes for a difficult management job.

Kelly clearly has a challenge, but the show desperately needs a strong director. Kelly should just remember the first rule of the job is don’t upstage the star. Unfortunately, the second may be don’t inhibit the star’s access to his fans or to expressing his true feelings. 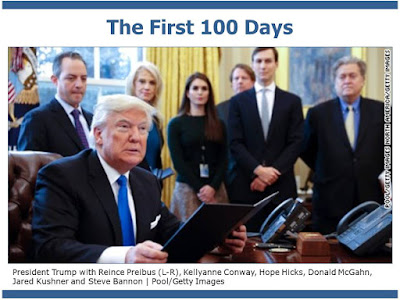