In Age of Disruption, Governing is Tough

Although European establishment politicians hold power in France, Germany and Great Britain, they are struggling with leading the change the era and major segments of the public demand.

Prime Minister Theresa May was to bring a firm hand to the Brexit process, but lost an election to strengthen her majority and now only has the approval of a third of the public. She faces an unhappy right, an energized left and ever threatening secession sentiments.

President Emmanuel Macron swept into office extoling the EU and internationalism, while crushing the far right. But he shares with May the approval of only a third of the public. Budget cuts required by EU rules have alienated his military and his own style, criticized as imperial, has taken a toll.

Chancellor Angela Merkel continues to lead the Western leaders with more than half of the public’s support. She will likely win re-election. But, her approval has fluctuated and dropped recently as her re-election campaign deals with criticism from the left.

President Vladimir Putin’s 2018 election is in the bag, but he works public opinion like a pro, with a sophisticated propaganda machine, aggressive restraint of opposition and use of foreign policy for fueling nationalistic sentiment. He lets his prime minister take the blame for any weaknesses in domestic policy. His approval rating is in the 80s. Medvedev’s is usually well below the 50s.

President Donald Trump has been in office about 220 days, won office with 46 percent of the public and has never moved above that figure. Today, his approval is often measured below 40 percent.

The politics of the era of disruption is driven by the deep loss of trust in the government and major institutions, including national parties and its leaders, and the broad polarization among significant segments of the public, reinforced by the new technologies of communication; i.e., cable news, social media.

If you prefer a liberal democratic order and a free market, don’t expect it to survive without leaders and a public ready to fight for it. 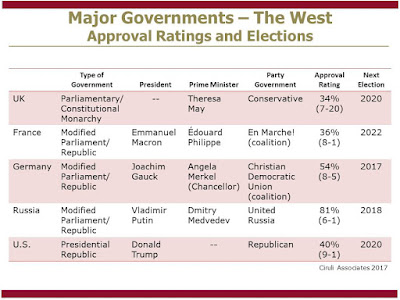