The original group that gathered around the Resolute Desk at the end of the first heady week have been decimated – General Flynn was first to go, next Sean Spicer and finally Reince Priebus. Vice President Pence has a secure job, and Steve Bannon appears a survivor. 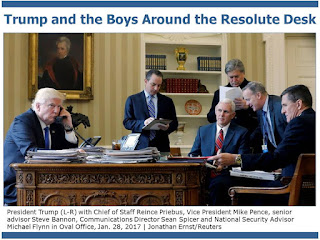 General Kelly’s first recommendation as Chief of Staff is being unanimously well-received. He removed the President’s most recent personal hire – Anthony Scaramucci (July 21 to July 31).