President Trump doesn’t make it easy for the majority of Americans to support his direction on North Korea.

And, of course, more than half the public (56%, RealClearPolitics average) disapprove of President Trump’s presidency as of mid-August and only 38 percent approve. He would be the weakest president in terms of approval at the start of a crisis involving military action since Carter (32% approval) in 1979 at the beginning of the Iranian hostage crisis. 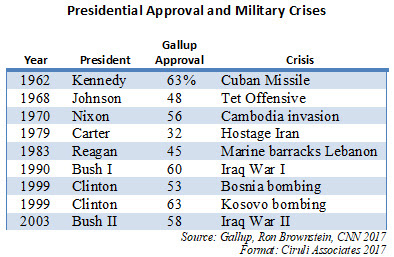 Trump has the advantage that most Americans rate North Korea as a serious threat, and know that previous diplomatic efforts have failed. But, Trump has to construct support for his approach from a very skeptical public.

“Locked and loaded” – 8-11, “Military solutions are now fully in place, locked and loaded, should North Korea act unwisely. Hopefully Kim Jong Un will find another path! He has disrespected our country greatly. He has said things that are horrific. And with me he’s not getting away with it. This is a whole new ballgame.”

Mattis – 8-10, “My portfolio, my mission, my responsibility, is to have military options should they be needed. You can see the American effort is diplomatically led. It has diplomatic traction. It is gaining diplomatic results. And I want to stay right there right now. The tragedy of war is well enough know; it doesn’t need another characterization, beyond the fact that it would be catastrophic.”