The Dow has hit four 1,000-point records since Donald Trump’s election nine months ago, but on August 2, the day it crossed its latest record (22,000), the President’s approval rating hit a new low –33 percent (Quinnipiac).

Trump often rails that the media does not give him enough credit for the markets. In fact, he was frequently mentioned as having unleashed pent up optimism from investors and businesses based on his having a pro-business cabinet and agenda. But as the agenda bogged down in Washington, his contribution got less notice, and more credit now goes to good earnings reports, low interest rates and a reasonably calm world economy. An economic recovery going into its 9th year is also a driver. 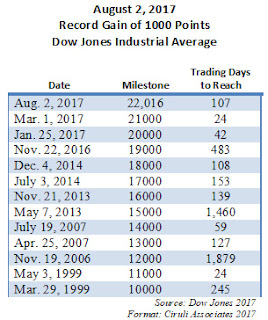 The latest 1,000-point record represents an 11 percent increase for the year and a 20 percent increase since the election (183 trading days). In spite of the dysfunction in Washington, the market continues to surge, hitting its latest increase in a mere 107 days.

Trump’s approval rating, however, has been moving in the opposite direction, with the latest polls placing it in the mid 30-point range. His approval (using RealClearPolitics average) – never high – is 8 points lower at about the same time the market is 10 points higher.