Donald Trump early on liked military officers. They are now the most prominent feature of the administration. His attraction is partially based on military officers being mostly non-partisan, very professional and tending to support the commander-in-chief, even if they disagree with some policies.

Marines, who have the smallest officer corps of the four major divisions, are holding key positions in the government’s foreign policy establishment and White House: Generals Mattis, Dunford, Kelly and Alles (Secret Service). H.R. McMaster is Army and operates the National Security Council.

The Corps had serious reservations with Barack Obama’s risk avoidance foreign policy characterized by withdrawal from Iraq and Afghanistan and little involvement in Syria. In Trump’s administration, there is a potential for conflict with the nationalist camp. The Corps (and the Army) believes the peace and prosperity of America depends on the order established by the United States since the Second World War. The threats they see today will not be addressed by any form of nationalistic isolation. 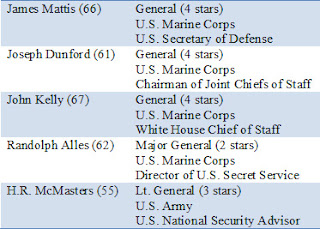