Thirty days after the end of a mostly positive first half of the year, the stock market continues to break records. The Dow was up 542 points for the month, ending at 10.8 higher year-to-date. The NASDAQ and the S&P 500 both hit record highs. Earnings have been positive and the Federal Reserve is holding steady, projecting some, but rather restrained tightening. The underlying economy continues to show improvement, but a few indicators, such as retail sales and consumer sentiment, flattened.

One factor expected to negatively affect the economy and the market was the gridlock in Washington, but it hasn’t happened yet. In fact, one of President Trump’s best indicators is the public’s view he’s working on jobs and the economy. Trump and Republicans in general get their highest approval ratings dealing with the economy. 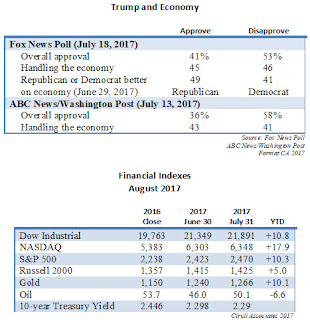 See The Buzz: Market ends mid-year up, but roily
Posted by Floyd Ciruli at 4:33:00 PM