All Roads Lead to Putin

The House of Representatives voted 354 to 60, including 129 Republicans, against President Trump’s abrupt Syrian withdrawal (10-16-19). Trump’s foreign policy behavior, besides Ukraine, is becoming connected to his potential impeachment. The White House confrontation between Speaker Nancy Pelosi and Trump on the same day of the Syrian rebuke weaved together Ukraine, Putin, NATO, Syria and Saudi Arabia.


The Speaker Confronts the President
on “All roads lead to Putin”
“The Russians were the beneficiaries of any withholding of assistance or encouragement to the Ukraine. Again, Putin benefits. The Russians benefited, Putin did, when the president placed some doubt about our commitment to NATO, right from the start of his administration. All roads lead to Putin. Then, the president said, ‘Well, the reason I’m taking the troops out of Syria is because I promised in the campaign to bring the troops home.’ My question to him is, is Saudi Arabia home? Is Saudi Arabia home? […] He said ‘Well, the Saudi Arabians are paying for it.’ Really, we’re putting our troops in harm’s way for Saudi Arabia because they’re paying for it? […] What it did do was cause a meltdown on the part of the president because he was unhappy with those questions.” (Brookings, Oct. 18, 2019)


A majority of the public back the impeachment inquiry and 48 percent support actual removal from office. While the Democrats want to move more quickly, each week’s testimony and events bring more bad news. 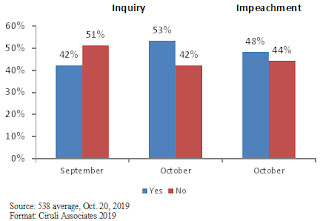 Although Trump is unlikely to be convicted in the Senate – he only needs 35 Republicans – he is increasingly likely to see more than half the Senate – 50 votes – in favor of his conviction.
Posted by Floyd Ciruli at 11:54:00 AM