DPS in Fight for Its Future

Since the DPS teachers’ strike settled mostly to the union’s benefit earlier this year, the union’s goal has been taking control of the school board. The election on November 5 will record their success or failure. Three seats out of seven are up, with none of the reform (non-union) group of incumbents, who have dominated the board for a decade, running. A two-seat victory by either side of the union vs. reform split will decide the district’s direction – pro or anti strike, pro or anti charter/independent schools, and pro closing low performing schools or anti closing any schools.

More than $1.3 million has been spent on the campaigns, balanced between the two sides, with mailers and social media inundating Denver voters. Six candidates on the two sides are facing off for the three positions. 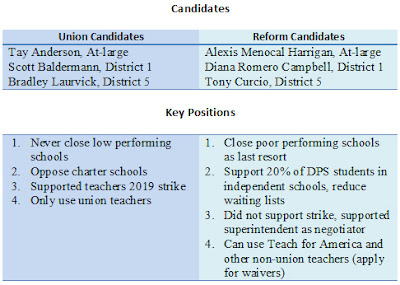