In an interview with KOA’s morning anchors, Marty Lenz and Ed Greene, the prospects for Senator Cory Gardner’s re-election and Senator Michael Bennet’s presidential bid were discussed. Neither looks good as of now.

Cory Gardner
Gardner’s major challenge is being tied to President Trump, who is not popular in Colorado and has had a very bad month. Starting on September 24 with Speaker Nancy Pelosi’s announcement of an impeachment inquiry, to the President’s tweet on the Syrian withdrawal, to the announcement of the pullback of the G7 Summit at the Doral, Trump has forced vulnerable senators, such as Cory Gardner, to answer very controversial media questions guaranteed to cost votes from the many Colorado voters who don’t approve of Trump.

On October 11, Gardner attempted to duck – not very successfully – a pointed question on asking a foreign country to investigate a political rival. But on October 16, he declared support for the House resolution rebuking the President’s Syrian withdrawal. 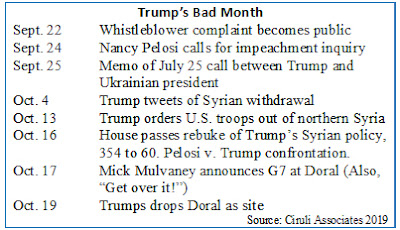 A new poll confirms earlier data that Trump is highly unpopular in Colorado (60% all voters rate him unfavorably), especially among unaffiliated voters (67%). Similar to national polls, 54 percent of the public want an impeachment inquiry to start. Nearly all Democrats (91%) and almost no Republicans (6%) support it, but 61 percent of Colorado unaffiliated voters do. A group, that if against you in Colorado, spells doom. Trump is politically toxic statewide in Colorado.

Also, the poll shows, as many previous polls have indicated, the Democratic frontrunner, John Hickenlooper, has an 11-point advantage over Gardner, 54 percent to 43 percent, again with unaffiliated voters at 61 percent to 34 percent advantage Democrats.

Michael Bennet
In an interview on October 15, as Michael Bennet watched the Democratic debate, he did a running dialogue on his views of the candidates, his anger at not being on the stage and an acknowledgment of his longshot status.


At the end, Bennet admitted he’s a long, longshot, but believes his message and approach is what the U.S. and Washington needs to heal and move forward after 2020. He will shortly be dragged back to an impeachment trial in the Senate, which may be a relief from endless meet and greets in Iowa.