The mostly unknown group of U.S. Senate candidates is hoping that the Colorado Democratic Party is as divided between progressives and moderates as the national party appears.

Some local political observers seem to agree, but that viewpoint is countered repeatedly by polls. A just released poll makes it clear that John Hickenlooper is a 60-percentage point favorite for the nomination (PPP, 8-28, 30, 2019), and in a host of polls, he’s the ten-point leader over incumbent Republican Cory Gardner.

Answer: Because the overwhelming interest of Democrats isn’t the right-left contrast, but defeating Cory Gardner, who they consider far-right. In this calculation, Romanoff’s handicap is that he’s lost two high-profile races. He has little credibility that he can win statewide. The other candidates are mostly unknown and untested in the critical criteria of defeating a strong campaigner like Gardner, who will have millions of dollars available for negative advertising. A two-term gubernatorial track record is a huge advantage for Hickenlooper over lesser known candidates without similar political experiences. 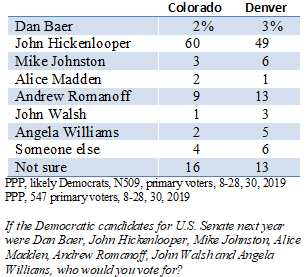 Hickenlooper was a bust in the presidential race, but he’s going to be hard to beat for the senate nomination.