Jerd Smith, as part of her Water Education Colorado beat, reported that with six weeks until the November 5 election, the public has a low-level of awareness of Proposition DD, legalizing sports gaming to fund the State Water Plan.

Supporters have a major media campaign planned and no funded opposition. But, they still have a lot of voters to convince.

Smith reported on my Adams County voter poll that showed nearly a fifth of voters undecided (18%) and support below opposition as the campaign began. Also, men (47%) are much more supportive than women (32%). 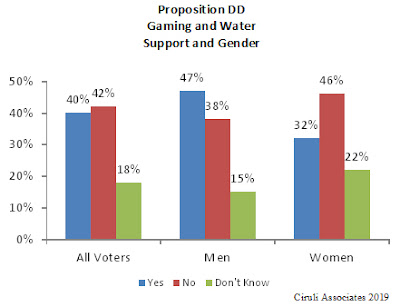 With campaign coffers full, DD could get a yes from Coloradans, Ciruli said.

“The public, over the years, has demonstrated that water is very valued and the water plan itself was popular,” Ciruli said. “Right now, beyond extreme environmental interests, [DD] isn’t generating much opposition. It could be a good sell.”
Posted by Floyd Ciruli at 3:53:00 PM