Examining the campaign and recent off-year ballot history, Proposition DD, sports gaming for water, should win. They have a broad group of endorsements, from businesses, agriculture, water, many environmental interests, and most of the state’s newspaper editorial pages. The campaign also has $2.7 million (reported in late October) for advertising, to no funds declared for the opposition.

Proposition CC on the other hand is in a serious fight. 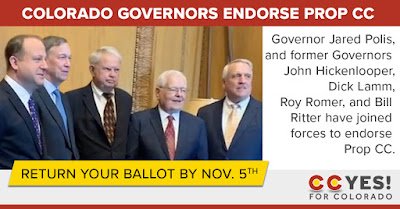 Three ex-governors and Jared Polis weighed in to support it, accompanied by a $4.5 million advertising campaign. They have two major advantages. The “happy talk” ballot wording that avoids unpleasant details or possible problems for an upbeat description that attempts to counter the proposition’s main vulnerability. The ballot title highlights: “Without raising taxes and to better fund public schools….within a balanced budget.”

The second advantage of Proposition CC is the $4.5 million campaign, using all the online and election media available with their message of funding for teachers, roads and colleges with no new taxes.

But, the opposition also has some advantages, the most important being low turnout in an off-year election. As of last Friday, Proposition CC would have likely lost. Republican turnout was 62,000 voters above Democrats, with counties, like El Paso (90,700), Douglas (41,000) and Jefferson (89,700), having high early turnout, whereas Denver (56,500) and Boulder (38,800) lagging,

Republicans represent only 28 percent of current voters, whereas 38 percent of Friday voters were Republican.

One Republican governor missing in the picture is Bill Owens, who is helping lead the opposition with most of the Republican establishment. They have a more modest $1.8 million campaign, and the message is more diffuse than more teachers and roads with no new taxes. The Republican Party has gotten out the early vote.

But the Democrats need to get out their core voters. And, indeed, Denver and Democrats in general have been voting the last weekend and the last day in recent elections. As of Friday, nearly 700,000 votes were in, about half of the expected (1.4 million).
Posted by Floyd Ciruli at 1:21:00 PM