Colorado Senate Race With Three Million Voters, But Within Two Points, or 60,000 Votes?

Colorado voter registration is racing toward four million (3.9 million active and inactive today) and turnout is exceeding 75 percent. In the 2004 presidential election, registration was 3.1 million, with Republican registrants ahead of unaffiliated voters and 178,000 in front of Democrats. Republican officeholders had dominated the state with President Bush winning the electoral vote, and Republicans having the governorship, both senators and four of the congressional seats.

After a decade of rapid population growth, starting after the Great Recession (2008), Democrats went ahead of Republicans, but unaffiliated voters exceeded them both. They are now at 39 percent of the active electorate, and exceeding second-place Democrats by more than 300,000 voters. Republicans have dropped into third-place. 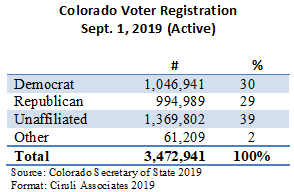 Turnout is also rapidly increasing. The most recent non-presidential year, the 2018 midterm, had a peak turnout when 2.5 million voters showed up and gave the Democrats an across-the-board win. Interest in the upcoming election and the polarized political environment suggest a robust turnout exceeding 3 million voters.

Although turnout has grown, the results in the U.S. Senate races are frequently tight between the parties, except for Michael Bennet’s 2016 blowout of Darryl Glenn by 155,000 votes. It was a good Democratic year – Hillary Clinton beat Donald Trump by 5 points and Darryl Glenn was not a strong candidate and took a long time to develop a campaign. 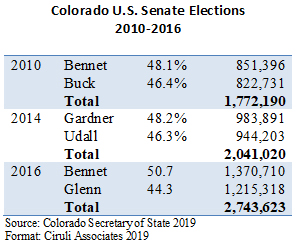 The 2010 and 2014 elections were within 2 points and less than 40,000-voter difference. Colorado was considered a swing state and statewide elections were often closely contested. Is the growing Democratic advantage seen in the Bennet senate and Jared Polis gubernatorial races (10-point wins) becoming the longer-term trend or is it just a reflection of the polarization of the Trump era?
Posted by Floyd Ciruli at 11:57:00 AM