Colorado voters have had an ambivalent relationship with gaming, limited experience with tax funding water projects and are decidedly hostile to statewide tax increases.

State Taxes
Elections since the early 2000s reinforce voters’ lack of trust and support for state tax increases, for example, with “no” votes for education funding in 2005 and a deluge of “no” votes in the high turnout, generally liberal, electorate of 2018, defeating tax increases for schools and roads.

Water
The only water proposal using bonds to fund water projects was crushed in 2003 (Amend. A).

Gaming
After years of effort, a limited gaming proposal was approved in 1990, legalizing casinos in three small mountain communities, with final approval in 1992. Since then, efforts to increase gaming to other locations, such as a host of small counties and cities outside the Front Range and at race tracks, have been defeated. Only a proposal to expand hours and betting limits in the three casino cities passed (2008) since the original authorization.

In the last two decades. Gaming expansion beyond the current footprint has been defeated by super majorities (81% in 2003 and 70% in 2014). In both cases, the gaming industry mounted well-funded opposition campaigns. In 2003, the proposal expanding gaming to video lottery, to horse and dog racing tacks, and again in 2014, the goal was to provide economically-struggling race tracks with off-site betting – the answer was no. 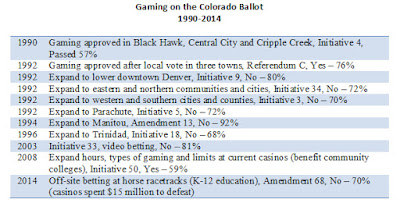 Legislative and industry proponents of Proposition DD, the 2019 gaming sports proposal, have tried to carefully tread this difficult history. Their proposal offers the following:


The campaign will start in earnest in early October and mail-back voting shortly begins after October 14.
Posted by Floyd Ciruli at 4:03:00 PM