Crow Gets a Challenger

Steve House, former State Republican Chairman and recent party CEO, has just announced a challenge against freshman Congressman Jason Crow. In an interview with April Zesbaugh and Ed Green, the question was why since Crow just won a huge victory over seemingly indestructible Republican Michael Coffman, mostly attributed to an outpouring of opposition to Donald Trump, and Trump will be on the ballot in 2020.

The Republican Party recognizes that without winning back, or at least making inroads, in a key county like Arapahoe, they can’t win back the U.S. House or hold the Senate.

Their calculation includes the following:
Crow is obviously moving away from a less partisan and moderate image. On July 31, he endorsed initiating an impeachment inquiry against Trump. In May, he did not join his liberal colleagues, Diana DeGette and Joe Neguse, to start an impeachment inquiry. Most voters do not support impeachment. So, many Democratic House members from swing districts, including a cautious House leadership, remain opposed to a formal inquiry starting. Crow must feel confident the 6th District is leaning very blue, especially with Donald Trump leading the Republican ticket. 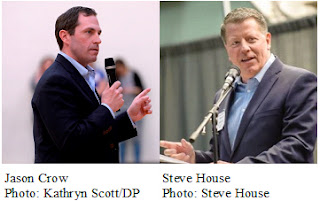